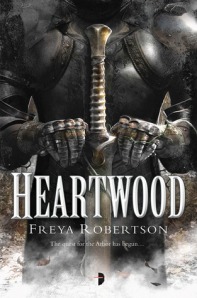 Publisher Description: Chonrad, Lord of Barle, comes to the fortified temple of Heartwood for the Congressus peace talks, which Heartwood’s holy knights have called in an attempt to stave off war in Anguis. But the Arbor, Heartwood’s holy tree, is failing, and because the land and its people are one, it is imperative the nations try to make peace.

After the Veriditas, or annual Greening Ceremony, the Congressus takes place. The talks do not go well and tempers are rising when an army of warriors emerges from the river. After a fierce battle, the Heartwood knights discover that the water warriors have stolen the Arbor’s heart. For the first time in history, its leaves begin to fall…

The knights divide into seven groups and begin an epic quest to retrieve the Arbor, and save the land.

Review: This novel had many issues but had characters that were well developed and the flow from chapter to chapter was pretty good. The author’s knowledge of sword fighting and the fight scene positioning was off by quite a bit. In one scene she has Chonrad running to a felled warriors assistance and dropping to cradle their head, then killing the Dark Water element while it trips over the body of said felled warrior. So you’re fighting for your life but have time to kneel and coddle, then kill the bad guy. What is the bad guy doing during all this? Taking a smoke break? And since Chonrad and the baddie did not reverse positions, how does the bad guy trip over the felled warrior, backwards, into the water? If he emerged from the water, then the felled warrior should be in front of him, not behind him. In another “fight” scene, the Heartwood Knights react to an insult tendered by Wulfian guards in an Inn. So everyone draws swords, the fight ensues and all of the Wulfian guards are disarmed and everyone goes to sleep. Huh? So the Wulfians, notorious for being aggressive, blood thirsty women haters, decide to stand down to women knights?? If your going to have a fight scene, develop it, don’t just have an “all of a sudden we win” resolution. There is a lack of fight scene development throughout the novel.

I was a bit put off by the whole concept that the Heartwood Knights and the Exercitus, having been groomed since children to defend the Arbor and extremely skilled in the fighting arts, constantly cry and moan about this or that. Whenever they are on the road, there is some knight that has tears in their eyes or is hiding their emotional reactions to: leaving Heartwood, someone dying, self doubt or past guilt. Shouldn’t knights brought up in a martial society be a little more accepting of death as it is an integral part of their chosen path? You also have this constant “I am a Knight of Heartwood” shtick and “My oath and vows can never be broken” that the women Knights iterate at every turn. Then the minute they get on the road, they are attracted to this or that guy and start sleeping around. So much for a life time of vows to the Arbor and Heartwood, eh?

As the Knights travel across the land, it is funny how they always seem to find a fine meal and a hot bath and plenty of sex. They whine about the hardships of the quest that they are only a week into, but find a place for relaxation at the end of the day. Why is there so much food to be had, when the initial premise was that the land is failing and starvation is rampant? Hence the quest to fix the Arbor Nodes, right?

There has to be a bit of the ole’ “suspension of disbelief” where Nitesco the librarian finds a secret passage, during a water element attack, in which resides an ancient library. This library not only holds the answers to their current woes (land dying, Dark Water elements, magic node fix etc.) but the real intent and principles that formed the basis of their animus religion. Well just up and fuck me, we got a story-line folks! Seems like the author is starting to flirt with Deus X machina. But will she go all the way? I mean we are almost to first base.

The cover art is pretty good. Not surprising as Angry Robot usually has some of the best in the business. Although the Knights wear chain mail armor, not plate armor as depicted on the cover.

This novel had a lot of issues. From story-line progression (logic) to some fairly lengthy internal-dialogue. Did I like it? Yes. When all is said and done, I ask myself “did I enjoy the story while I was reading it?”. The character development was very good and that kind of swung my opinion in a favorable direction. The scene descriptions were also very well done. The ease of visualization is key in an adventure epic novel. In the end there were just too many screw ups in this novel to give it a real high score. With a little effort at cleaning up the story-line and some logic failures this could be a really great epic series.

One thought on “Review: Heartwood by Freya Robertson”