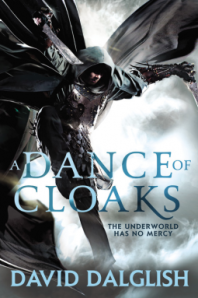 Publisher Description: The Underworld rules the city of Veldaren. Thieves, smugglers, assassins… they fear only one man.
Thren Felhorn is the greatest assassin of his time. All the thieves’ guilds of the city are under his unflinching control. If he has his way, death will soon spill out from the shadows and into the streets.
Aaron is Thren’s son, trained to be heir to his father’s criminal empire. He’s cold, ruthless – everything an assassin should be. But when Aaron risks his life to protect a priest’s daughter from his own guild, he glimpses a world beyond piston, daggers, and the iron rule of his father.
Assassin or protector; every choice has its consequences.

Review: As you can see, two covers were developed for this novel. I think the Faceless woman is the best. Approaches the surreal when juxtaposed to imagination. This was a re-write by the author as he had some unfinished business with the original development as there were plot elements that didn’t make sense or were loosely tied together.

The beginning of the book had some laughable dialogue. For instance, they are in a room full of cutthroats and rogues that would sooner slit your throat than talk to you and the author describes Aaron as “His features were soft and curved, and he would no doubt grow up to be a comely man…..soft blond hair, ..deep blue eyes” etc. etc. I really thought this novel was written by a woman, as the character dialogue was just not how a man thinks. Sometimes this read more like a pirate musical where after a bout of prolonged dialogue you expected the chorus to shout “Arrgh” or “HA-HA!”. The joining of diatribe with story-line explanation tends to wear a bit on the senses. Why not let the story unfold and all will be revealed or perhaps surmised? Subsequent novels (as planned) will fill in the gaps.

There are some odd instances in the novel that don’t make sense like how Kayla secrets dozens of daggers about her person. So lets say that “dozens” means conservatively, 36 slender knives. That’s quite a bit of weight and coverage area on a small woman. I could go on with the discrepancies in the story-line but don’t have the energy to really nitpick.

This was a weird jumble of characters with no one character getting sufficient development to interest you in them. The author had many chances to really develop the characters and fell flat with Thren and Aaron, the main characters. I really liked Kayla, but the author kills her off. I like the Faceless as well, but the author kills 2 of the 3 off. I didn’t like Alyssa, as she was whiney most of the time but the author invests quite a bit of the story line into her character. Thren is a one-dimensional sociopath that must be developed a little better to be believable. You can’t ascribe emotional outbursts or feelings to a character that reside in the dialogue without further development. Yeah we get he was a cruel sociopath, yet sociopaths rarely show emotion like Thren does. So what makes this psycho complex? Aaron’s development is just strange. Here we have a kid of eight, that kills his brother and becomes number one son to rule the Guild when Thren moves on. Aaron develops into a kid with a conscience, that can no longer kill at others discretion but still kills by his own?? A hooker with a heart of gold story. Aaron should have been one messed up kid, and the author sells us short by not entering a truly tortured mind/soul and his subsequent rise out of the hellish mires. The coverage and development is passable but not believable.

This was an entertaining novel and if you have the time and are not inclined to nitpick, you may enjoy yourself. I did.