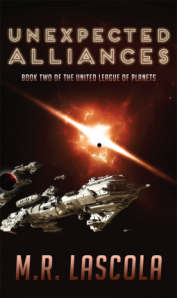 Publisher Description: When Marion Britton spots an unidentified faraway object, no one could predict how it would be the United League of Planets’ biggest challenge yet…

Dr. Marion Britton sat at her computer station on the exploration ship, the Star Gazer, staring at a black dot silhouetted against a star going super nova. She was transfixed by the object when Onreen, the Gleesosian captain of the ship and her best friend, walked up and asked, “What are you looking at?”

Review: This was initially science fiction until we got to the dragons that can talk part. Talk about mashing two genres together.

Earth has become this liberal wet dream, where dependency on fossil fuels is becoming a thing of the past, all weapons are banned and the fucking United Nations has morphed into the New World Government, where there are no borders but evil Hench Muslims are hiding weapons deeeeeeeep below the surface of the Earth and yada yada yada. Really? All because the Gleesosians (LOL!) brought some new technology to Earth. Hmmm. Sounds farfetched. But no, wait! There are talking dragons that have lived on Earth for (I am assuming) millennia but were persecuted and now some live on Gleesos and the white ones are speshul and they live for, like……millennia and one time at band camp….

The dialogue is endless and all the characters behave like they all love each other. Even during a crisis there is this smug back slapping and smirking camaraderie. There is this group of 3,000 ships that the LEAGUE OF SUPERHEROES er……um….UNITED LEAGUE OF PLANETS (ULP), has found, and by gum they could be invaders or more likely…..refugees! Fug. The funniest part of this shjt encounter with “Aliens” is that they are human, speak an understandable dialect (ENGLISH), have Earth names yet are from the planet Utron. This was a laughable mixture of shjtty dialogue, a non-sensical story-line and fugging talking dragons that want their own planet. zzzzzzz, wha?