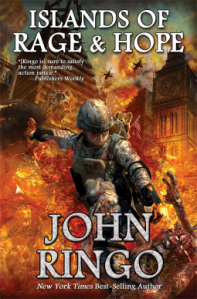 Publisher Description: With the world consumed by a devastating plague that drives humans violently insane, what was once a band of desperate survivors bobbing on a dark Atlantic ocean has now become Wolf Squadron, the only hope for the salvation of the human race. Banding together with what remains of the U.S. Navy, Wolf Squadron, and its leader Steve Smith, not only plans to survive—he plans to retake the mainland from the infected, starting with North America.

I just can’t seem to get over the hump on this series. There are two huge glaring, non-believable holes in the story-line. Faith and Hope. Faith, a 13 year old marine platoon leader that is this legendary zombie killer that garners the respect of the entire military and will faith-fully follow her into hell and back. Her sister is a 15 year old ensign in the Navy and commands a ship of her own. Are you fugging kidding me? Really? I don’t even know where to start as I have a hard time suspending my dis-belief in order to read this crap.

The author did a better job on the firearm portion this go around but still misses the mark, imho, on a few things. How does a 13 year old girl wear a 100+ pound ruck, abseil down to a rooftop from a helicopter? Also, why is she still using a crappy Saiga? And if she is taking on hundreds of zombies, why would she take a Saiga? The weight and space that shotgun shells take up would prohibit her taking the multiple weapons and ammo that she did. We hear the same old crap about the 5.56 Barbie gun, when accuracy is really the issue. The author makes good use of a head shooter in the building that begins to make sense, finally.

There is one passage that was reminiscent of the trapped marines all agreeing that they would go insane if they didn’t get to rotational rape…..er have sex with the lone marine female in the group (whom got pregnant) that tends to resonate in vile fashion. See two kids are rescued that were on a lifeboat. They find out that the 12 year old girl is extremely pregnant. Only the two claim that they never had sex. They examine the girl and find that her hymen is intact. When questioning the 17 year old kid, they find that he had nocturnal emissions. So according to Mr. Science Marine guy when a female likes a certain male her labia expands and when added with the high salt content of the water in the life boat mixing with the kids semen (super sperm) it somehow managed to facilitate an immaculate conception. Fug. Not only is this a stupid unnecessary interlude, but Mr. Marine Science suggests that since she is pregnant anyway that they need to start having sex at least once per day in order to thin the vaginal walls for easeing child birth. What this has to do with killing zombies finding a vaccine and securing areas for normals I have no fucking idea.

Despite obvious story-line fails, as mentioned, the dialogue was extremely heavy and jumped around to the point where you didn’t know where the shjt you were in the story until a few pages later. “Oh, I see where we are. We are no longer on a ship, but at Gitmo”.

I have shot in high level shooting competitions with 10-18 year olds and I can tell you, that at 13, kids just do not have the strength, speed, experience, agility, endurance to pull off anything resembling what the author purports in his anti-heroine, Faith. And that’s just the physical side of things. Faith also has the intellect and presence to command a marine platoon and the adult gift of internalizing bloodshed and a broken humanity on an epic scale? Fug this book.

One thought on “Review: Islands of Rage and Hope by John Ringo”