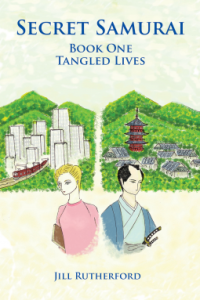 Publisher Description: This is the start of an exciting and intriguing romantic adventure trilogy which, in 2012, time-slips feisty young graduate, Bebe Bell, into the mind of Kai Matsuda, a samurai fighting to save his country in the civil war of the 1860’s which ended the samurai system and gave birth to modern Japan.

Review: Meh? Bebe is a boring character. She falls unconscious and lives a life through a late nineteenth century samurai thereby affecting his thought patterns, mannerisms and emotions. So it’s not a past life regression kind of thing. Almost as if there is no temporal limitation to the experiences of both Bebe and Kai.

Bebe teaches English and is of course hot. She gets a new student, Kenji, with a ruffled mien and shadowed past whom she falls in insta-love. Throughout this pedantic history lesson, Bebe runs around like a frightened geisha crying at her predicament (because living through the eyes of a samurai must be traumatic).

Despite the stilted dialogue, lack of movement and lame character development, the world building is creative and merits an extra star. Hopefully the next installment in this continuing saga will pick up the pace, otherwise you will be mired in Bebe-isms.