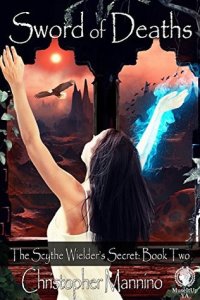 Publishers Description: Susan Sarnio made a choice, and will spend the rest of her life as the only female Death. Last year she was bullied and ostracized. Now, to her complete bewilderment, four Deaths vie for her affection.

Review: Wow, Susan went from a scrappy first year student fighting for her life to Super Speshully Susan with magical bracelets and an ancient lineal connection. She has 4 boyz fighting over her while she seeks to find the answers to a mythical Death sword and magical bracelet.  How Susan is able to prance around, with long flowy black hair and a beautiful smile and not have 2 million boyz interested would be a neat trick. Heck, you could dress her in a burlap sack and shave her head and the boner-tension would still be high. Can you say “Plot Fail”? Susan ends up aging 4 years in 2 minutes and, you guessed it, has big tits and a curvy ass. Really?

Anyhoo, we revisit Quidditch….er…..Boskery: a game invented by douche bags where you hit each other with scythes and go numb with pain. The end. Really, the amount of time spent on Boskery will send you into a narcoleptic fit ending with your head bouncing off the table. While the first novel was really good, I am beginning to think that was just a lucky one off. In this installment the constant love interest crap and iterative dialogue about how speshul and smart Susan is, will drive you fugging insane. “Oops! I cut myself, Oww!. My bloody finger touched the stone and now a hidden room is revealed with a magical bracelet. What a coincidence that we were just talking about that bracelet……” Sigh.

New to this story line is the poor little black kid named….Tom. Good choice of names there. We get the usual blacks are good, whites are evil story and Susan blushing about, well, everything. I get that this is made for the YA crowd, but can’t it at least be palatable? Really, if I had a hard copy of this novel I would box it and ship it to Amsterdam because only the truly stoned could have a good time with this.

2 thoughts on “Review: Sword of Deaths by Christopher Mannino”