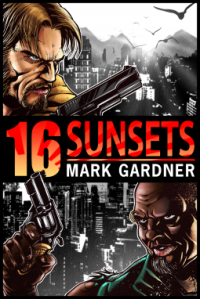 Publishers Description: Kristof led a simple life with a simple problem: Terminal cancer. The problem is, his life isn’t simple anymore. He’s just discovered he has superpowers, and only has sixteen sunsets left to live. So what will he do with his remaining time?

Review: There were a lot of good elements to this story. Kristof is a great character but his wife’s antics don’t make much sense. She’s worried sick about him one moment or holding his hand in concern then can’t wait to divorce him. She thinks he’s a gross pig then can’t wait to bang him on the couch.  Conflicted?  Nah, she just doesn’t read as conflicted as the real source of her angst is never revealed. Did he cheat on her? Does she love someone else? Does she want something different in life? Dunno, and you won’t either. Anne is one great character to follow. Her backstory was revealed in elegant simplicity and she captures the movement and builds a better character each time she is revealed. Stunning work. Most of the supporting cast are built very well and enhanced the overall appeal of the novel.

Initially the storyline is easy to follow but trends towards the confusing as logical story line progression is thrown out the door. In this case it works, as it adds a bit of the unknown to the story line which is appropriate to the characterization. The repetitive nature of the scenes which involve Peter is there to drive home a point and any  alternative would not do it justice in describing obsessive behavior. The novel is rife with coincidences where you have to work real hard to suspend your disbelief. To be fair the story line is a bit compressed with fast paced movement so you have to get there in a hurry.

An entertaining read from a new and talented author that leaves room for successive novels.