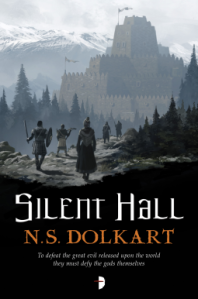 Publishers Description: Five refugees from a plague-stricken island cross the continent searching for answers. Instead they find Psander, a wizard whose fortress is invisible to the gods, and who is willing to sacrifice anything – and anyone – to keep the knowledge of the wizards safe.

Review: An obvious first attempt at writing that strangely works.

The world building is what really stood out in this novel. Descriptive elements are the emphasis rather than the character development. Each character has named chapters that give their unique perspective on the traveling entourage and their own internalizations. Add in some wizards, Elfs, a dragon and a few angry Gods and the patterned recipe is set.