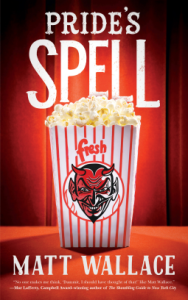 Publishers Description: The team at Sin du Jour—New York’s exclusive caterers-to-the-damned—find themselves up against their toughest challenge, yet when they’re lured out west to prepare a feast in the most forbidding place in America: Hollywood, where false gods rule supreme.

Review: A novella a bit longer than average that reads in length like War and Peace.

Although the action was fairly constant and consisted of the CRASH-BOOM!! variety, the characters were woefully underdeveloped and relied on cursing or levity in tense situations to build a shallowness to scale. The storyline was barely cogent and seemed to lack logical progression in the midst of an undefinable world. Although I am new to this particular party, I should be able to reason out a story line within the current melee and work out an understanding of preceding novels and how they tie into each other. I was never given enough information to even intuit the disparate threads that make up a whole because I think the “whole” is never defined adequately. While the characters were boring in that you never really care what happens to them (patterned conflict resolutions), there were some fun instances with the Easter Bunny and others.

I suppose this is more of a cult following that I failed to understand with limited rhetoric in hand.

One thought on “Review: Pride’s Spell by Matt Wallace”