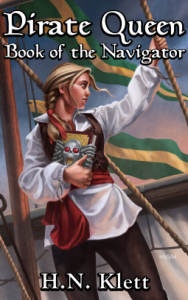 Publishers Description: Hailey Heartstone’s life is swept into a storm of peril after she stumbles upon an ancient talking book, the book of the legendary Pirate Queen. Once unlocked, its dangerous power thrusts her into a world full of deadly mists and phantom pirates intent on recovering what once was theirs. Kidnapped from her family, Hailey must face true fear as she is forced into a journey to protect the power that she found and seek out those willing to help her save all that she loves before it is too late.

Review: I could have sworn that this novel was written by a woman as the perspective is spot on when viewed through Hailey’s eyes. Hailey is special, but that’s ok here because the pirate book tells her so and yet she still wanders around in disbelief. Hailey, like most heroines, are written as being at once really smart and dumber than a bag of hotdogs. Why this is so, is mainly to build the plot and embellish the story line. It really is not needed when you have a strong protagonist, yet some feel it is necessary in order to develop the supporting characters.

This was a fun and imaginative romp through a world imbued with sinister royalty, good pirates, ancient tech and an airship! This novel was not only creative but highly entertaining. “So why you no give 5 stars!!”. You will know it when you read it, but Orin’s demise was not needed as it halted the movement and destroyed a good chunk of the plot. Additionally there were numerous grammatical errors.

I will definitely get the next in the series.