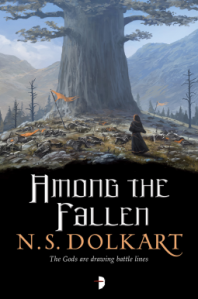 Publishers Description: In wake of the battle of Silent Hall, the city of Ardis is reeling, its leaders frightened and disorganized. The remaining oracle of the god Ravennis has resurfaced there and is spreading a new gospel – one in which Ravennis is the new Lord of the Underworld. Narky is swept up in the promotion of his religion, even while the prevailing church of Magor tries to put down its upstart rivals.

Review: Narky, Bandu and the gang are back in a more “settled” version of Silent Hall. Our traveling companions have mostly split due to various causal events and personal choices. As they find their way through a world influenced by the Gods, they are once again thrust into a series of pivotal events.

This was another great read in the series, although it lacked the punch of the first due to the loss of the social dynamic of a tightly knit group. I guess that is the evolution of growing up as everyone must part ways at some point. The chapters with Bandu, Phaedra and Hunter were always the most entertaining due to the quests and inherent confrontations. And why is Psander never adequately described if at all?

I really like this writer, despite having politically diametric views. He doesn’t bog down the story line with saturated dialogue or unnecessary phrasing. The movement is not only constant but appropriate to the character(s) being developed. His world is immersive and easy to visualize. I am constantly surprised how a new author can bring a creative world into the light of the written word and unfold a competent and entertaining novel. Really astounding, as it reads like an accomplished author that has been writing for many years. GET THIS!

2 thoughts on “Review: Among The Fallen by N.S. Dolkart”