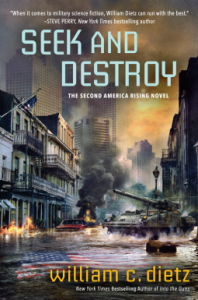 Publishers Description: As people fight to survive the aftereffects of more than a dozen meteor strikes, a group of wealthy individuals conspires to rebuild the United States as a corporate entity called the New Confederacy, where the bottom line is law. As a second civil war rages, with families fighting against families on opposite sides, Union president Samuel T. Sloan battles to keep the country whole.

Review: I really liked this novel even though it is fairly steeped in military procedure. The characters carry the story line, or rather are the story line as they develop through one crisis or another. The novel follows two sisters that are ideologically opposed and have not only different world views but go about implementing those views in very different modalities.

The slight fall down with the plot is that although the conflict between the North and South have been revived under the shadow of a natural disaster, there is a definite good vs. evil rhetoric that is revealed through thought processes and overt actions. Take for example the Confederate Army. They are willing to indiscriminately bomb civilian populations to realize their goals and resort to torture as an expedient means of gaining information. The Union Army always seems to take the high road and are morally outraged at their oppositions abhorrent actions. Not to mention that the mere idea that a civil war would re-enact itself during disastrous times is almost too far a stretch that a leap is required.

While the sisters are diametrically opposed, it is the thought processes that really bring the Us vs. Them shtick to the fore. Robin gets the shakes and feels deeply about the people under her command while calmly and effectively doing her job without complaint. Sadie barely knows her squad mates as that would compromise their overall effectiveness and petty emotions drive her reasoning. Hate, jealousy and pride predicate most of her actions.

President Sloan is interesting as a by-line but Robin Macintyre really steals the show with her presence and confident ability. Although it is fairly long, I had a good time reading this.