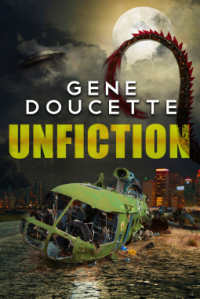 Publishers Description: When Oliver Naughton joins the Tenth Avenues Writers Underground, he figures he’ll finally get some of the wild imaginings out of his head and onto paper. Yet, Oliver’s stories don’t just need to be finished: they insist on it.

Review: This guy can write. I got so pulled into the first story that when it ended abruptly after one chapter, I was literally angry. It was a short story that Oliver was writing as part of his club. I almost dumped the whole novel but decided to push through my disappointment through to the end. While the writing was eminently engaging and the story line clever, it just didn’t pull me in. The characters had depth but the backbone of the story was just not that interesting.  See, Oliver writes stories that become real, but are just fragments of the whole as he has not finished them. Mmmmkay. I know this is pure subjectivity (like most reviews) but dang, infuse this story with some interesting movement.

Mostly I was bored what with all the dialogue that centered around writing styles and people living it as their reality. I know this has been done before but cannot recall the novel.  A big meh.