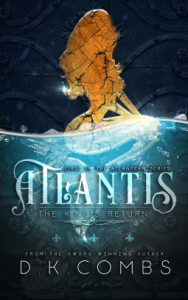 Publishers Description: Ambrose. The name is not only feared, but shunned and reviled. He’s a monster sentenced to a life of desolation and loneliness, and no one but his tormentor knows his whereabouts — at the bottom of the ocean. A creature of the sea cursed because of one simple mistake…

Review: Ah where to start. The opening to this novel was dam good. Mari has strength of character seldom read and is immediately thrust into an interesting story line with impeccable movement.  After her cruise ship sinks, she finds herself in a cave with a tortured merman and helps him escape his imprisonment. In order to save her life he turns her into an Atlantean and so begins the long slide into the shitter.

Mari not only turns into a mermaid but into a juvenile, petulant, recriminatory asshat. Her tantrums are epic, her tail denotes that she is a goddess (of course) and she loves mer-dick, specifically the guy she rescued who happens to be….. a King! At the end of this novel Mari is on land and behaving like an adult and is embarrassed by her behavior while under the sea. Well she went through the “CHANGE” and that made her emotionally unstable, which is a great excuse for writing pure shjt.

Why would an author knowingly sabotage her main character for the sake of writing juvenile romantic fantasy? It really boggles the mind that with writing talent in evidence that a constructed character with depth and strength was sadly, not built. This novel had HUGE potential. Great movement and writing talent coupled with a strong character and a story line on the verge of intricacy. Just a dam crying shame…..on YOU, DK “Sellout” Combs.