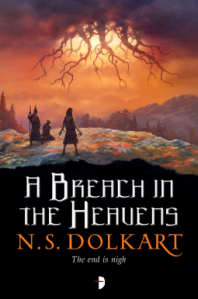 Publisher’s Description: The End Times have arrived. For over a decade, the sorceress Phaedra has had a single, vital task: to keep the world of the elves separated from humanity’s. But when her world experiences its first skyquake, it’s clear that something is very wrong. Has all Phaedra’s work been for nothing? She’ll need a new plan – and her friends’ help – to keep the worlds from smashing into each other and shredding all of creation.

First Movement: For about the first 30% of the novel with get all the main characters crying into their cups, or just basically ruminating about life and the God’s. Throw in some inter-personal tension and there you go. Unlike Silent Hall, where you had quests galore and movement tied to character development, this installment treads water like a retarded beagle. I guess now that the characters are settled (and older) they can express their inner blahs in hopes of adding depth. What you really get is a lot of petty recriminations and self-doubting. Not an expected turn of the writing wheel I was hoping for.

Second Movement: The story line picks up around the 70% mark as the exhaustive backstory runs its course and current events push the characters into action.  The only interesting character through out the novel is Phaedra. She is constantly on the move with entertaining interactions via the “quest”. The others reside in pedantic land, ruminating about life.

Final Movement: This phase of the novel condenses action that should have been spread evenly over the course of the story line.  It is at once surprising in delivery and expected in outcome. When the whole premise of the novel is iterated at length through out, you can only feign surprise at the end reveal. This “no chance at failure” leaves you reading comfortably but lacks the sincerity of unbridled creativity. Where is the chance that events fail to follow a patterned route thereby drawing the hopeful reader in?

Final Thoughts: A great series that ended with a burp. You can still enjoy the writing in this installment as the technical aspects are sound and the characters you have grown to love, still reside within.