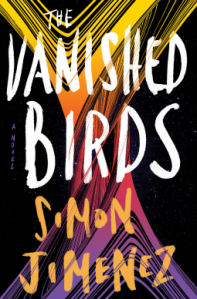 Publisher’s Description: A mysterious child lands in the care of a solitary woman, changing both of their lives forever in this captivating debut of connection across space and time. “This is when your life begins.” Nia Imani is a woman out of place and outside of time. Decades of travel through the stars are condensed into mere months for her, though the years continue to march steadily onward for everyone she has ever known. Her friends and lovers have aged past her; all she has left is work. Alone and adrift, she lives only for the next paycheck, until the day she meets a mysterious boy, fallen from the sky.

Review: I don’t know what to say. Astounding writing for someones first novel. This writer weaves a complex tale that spans lifetimes while revolving around the same characters. Fascinating and wholly absorbing from start to semi-finish.

“So why you no give 5 stars!!!”. While the story line moves at a pace that drives evolving characterization, the ending just plane sucked. There is this long build to become something greater and evolve within the universe that is never realized. The fail at culminating everything into a solid crescendo left no room in appreciating what came before. Like, what was the point?

So here’s to Jimenez for building one of the finest SciFi novels I have read in a long time. And also a poke in the eye for ruining it in a matter of pages. What a D-bag. 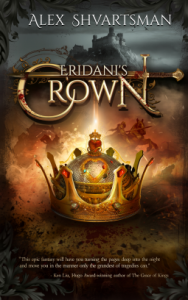 Publisher’s Description: When Eridani’s parents are murdered and their kingdom is seized by a traitorous duke, she plans to run. After she suffers yet another unendurable loss, the lure of revenge pulls her back. Eridani’s brilliance as a strategist offers her a path to vengeance and the throne, but success may mean becoming everything she hates. To survive, she must sway religious zealots, outwit ambitious politicians, and confront bloodthirsty warlords, all with few allies and fewer resources. Yet the most menacing obstacle she must overcome is the prophecy uttered by a powerful sorceress:

Review: With a many years spanning this novel, Eridani unfolds as more of an enigma in characterization rather than one spawned from influences that derive a logical outcome. Everything that develops within the body of the novel is sustained through personal choice(s) that leaves the reader saying in most instances “WTF are you doing?”.

The pivotal events and subsequent choices made by Eridani are manufactured as a means of acquiring what she desires in expedient fashion. Through doing what she originally abhorred in others….conquering and killing. Am I buying her sudden lack of awareness that she carried around like a shield in her formative years? Not really. Especially when the foundation of her persona is a distinct lack of trust in anyone to the point she sacrifices her closest friends and confidants. This ruthlessness is anathema to the young adult we experienced in her early stages. Yes, people change as I have seen the lows attain great heights and the greats diminish in turn. What is burned into the psyche is that Eridani is good deep within and no amount of external justification can change that.  Hence the enigma.

Is Eridani palatable as a character? Sure. Is she believable? Meh. Did I enjoy reading about her exploits. Oh yeah. Could the supporting characters have been expanded upon. Definitely. Will I buy the next in the series? For sure.

Publisher’s Description: I never thought I’d have a bounty on my head the size of the Milky Way. Of course, I never thought I’d be able to bend time, either. But hey, life is full of surprises. Don’t get me wrong, feeling like a goddess has its perks, but those perks come with a hefty price. My brain is tapioca. I’m stranded in the middle of dead space. Ratters are using me for target practice, and a giant, cybernetic monster named Oscar wants to use me for a chew toy. All this because I played superhero (or thief, according to some) and snatched a doomsday device from an intergalactic mobster. So if I don’t make it out of here alive, remember this: Above all else, I want a Viking funeral.

Review: A tongue and cheeky space opera that pokes fun at all the past tropes.  What I feared might become a stained attempt at brevity and forced dialogue was quashed by a writer with a flair for characterization, pacing and painting the descriptive.

A truly fun read that begs for more.

Publisher’s Description: In a lawless American West transformed by the Second Civil War, part-time bounty huntresses Ramona del Toro and Jo Lilly take a job: find and capture a mysterious woman named Cottonmouth, accused of murdering an innocent man. As they track her through northern Arizona, southern Utah, Colorado, and New Mexico, Ramona and Jo encounter colorful people who can only point them in Cottonmouth’s direction. When Jo and Ramona finally catch up to Cottonmouth, she reveals the truth. Will the bounty huntresses join their target or trade her for a bag of cash?

Review: This was a novella that should have been a full length novel, as the characters are very compelling.

There is a constant and consistent “white men are evil” theme throughout the novel where rape, abduction and general shiftyness are attributed. Natives are held in high regard as are blacks with Mexican gangs making an appearance to level out the evil playing field. To say the race baiting is off the hook is mild in comparison to the militant lesbian perspectives rendered.

The plot holes are huge. For instance how are they able to have power, gas, food etc. in a region rife with lawlessness and killing? Who would want to truck in gas/food to the desert southwest? How do they get bullets, why are there no rifles, why are all white men rapists, how do armed nasty white men allow militant lesbians to beat them and subsequently, execute them without much resistance. How are two women armed with handguns able to kill 5 Mexican gang members with their guns drawn and pointing at them? How is the power grid still up? How are the highways passable? How does a .45 caliber round make you more of a threat? There is one bad metaphor….“She looks like she could beat a man to death with a wrench, then use the wrench to fix her car without wiping off the blood.”

What I loved about this novel was the author’s ability to craft characters in a novella length story with depth. Not only is the story line compelling but the scenes are rendered in exquisite detail with just a touch of poetry for vibrancy. The author does a great job of tempering the social message with a main character that just doesn’t give a shit about anyone’s perspectives and associative causes that encapsulates a formed identity.

This is brilliant writing. Don’t be fooled by the rating as it is the highest I give for stories that are novella in length. 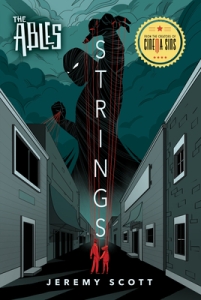 Review: This does not quite live up to the first in the series as the story line drifts a bit and wanders into adolescent love crush country.  This is tailored for the 12-13 year old crowd that longs to be 16.  Still, a good writer that needs to move on from the genre.

Publisher’s Description: When a prophesy brings war to the Land of the Black Hills, Keeley Smythe must join forces with a clan of mountain warriors who are really centaurs in a thrilling new fantasy romance series from New York Times bestselling author G.A. Aiken. With the demise of the Old King, there’s a prophesy that a queen will ascend to the throne of the Black Hills. Bad news for the king’s sons, who are prepared to defend their birthright against all comers. But for blacksmith Keeley Smythe, war is great for business. Until it looks like the chosen queen will be Beatrix, her younger sister. Now it’s all Keeley can do to protect her family from the enraged royals.

Review: This was a fun read that traipses around the edges of hilarity while imbued with visceral instances. What surprised me most is that the initial character of Keeley is soon expanded to include familial assets that take over the entirety of the novel. I thought Keeley would be a bit player in a varied story line that involves a quest or two where her skills are required. What we get is so much more, that while you suspend credible discernment in favor of a good time, you’re left wanting the next in the series to turn to. The only downer was that the “constant bickering theme” wore a little thin.

This novel is meant to entertain and not be taken seriously. The dialogue is light and pointed and the reactions are driven by base surface emotions with no attempt to build great depth. A fun short read.

Publisher’s Description: Reid has spent her whole life pretending to be a man so she can inherit her father’s estate, but when a chance encounter threatens to expose her lie, she is forced to risk everything.

In the kingdom of Marsden, women are subservient to men and land can only pass from father to son. So when Reid Ellington is born, the fifth daughter to one of the wealthiest landholders in the kingdom, it’s announced that Reid is a boy.

Eighteen years later, Reid struggles to conceal the fact she’s actually a young woman. Every day, her secret becomes harder to keep. When one of Marsden’s princes sees her sparring with a sword, she is forced to accept his offer and lead her father’s soldiers to the border. Along the way, she discovers a covert organization within the army known as the Knights of the Realm. If Reid wants to save her family from being arrested for treason and robbed of their inheritance, she will have to join the Knights and become a weapon for the crown.

To protect her family, Reid must fight like a man. To do that, she’ll need the courage of a woman.

Review: There have been quite a few novels set in the Knightly era, where a girl tries pulling off being a man for various reasons.  So where does this work stand among the masses? Read on!

What really stood out to me were the characters. Just patterned and bland. Take for instance Reid. Sword fighting boy whom gawks and then blushes at the site of her manly prince’s ripply muscles. She is a covert operative that fails at everything because there is always some royal to bail her out. Most of the characters follow the romance template of fiery passions and unrequited love. Barf.

The story line wanders a bit in order to build Reid as a super speshul character, only she ends up sucking as her lack of depth is detrimental to scene development.  So while not caring what happens to Reid, I liked Knox’s forthrightness and his ability to tell Ms. Speshul to go suck an egg. Sadly, he is brief in appearance.

So what could have been a great character in Reid, with depth via a life built as a boy and toughened by circumstance is relegated to a role of tears and romance. Fug.