Publishers Description: Tala Morgenstern lives for the hunt, embracing her heritage as a demon hunter. When her younger sister, Hartley, disappears while on the trail of her long-lost father, Tala must seek the help of her other sister Aiva, who has turned her back on the underworld of magic and hunting. Suspecting demonic involvement, Tala and Aiva race to find Hartley before she can be claimed by hell.

Review: I put this down after a few chapters with a considered review in mind, well a non-review that featured a DNF. Three hot, witch-like sisters that are part of the “Nighthunters” killing demons upon the Earth and getting hit on by anyone with a pulse. So after yawning my way through a few chapters and finishing some other projects, I had nothing to read so decided to finish a patterned novel with a kewl cover.

The characters never lived up to my initial bias. Which is a good thing. Tala is hot and uses her boobs (her words) to gain an advantage and has a one-nighter with a stranger because she can. Aiva is a prude but doesn’t go all “adjective” around men with their ripply abs and chocolate brown eyes. She just doesn’t have time for it. When not collectively killing demons and looking for their lost sister they are planning and researching their next move. The movement is constant and blends well with the story line and character development. The plot takes interesting and unexpected turns and the writing is superb. A solid 4 star read.

Publishers Description: A seemingly endless mission…That is, until, an uncharted planetary system appears between them and the Brontus Major Constellation. Why does it not show up on their scanners? And what are the strange missile silos doing around the planetary system? Kyle decides their only course of action is to send out a search party to try to find out what forms of life are there. However, when they lose contact with the search party they realise something must be wrong.

Review: An antiquated style of Science Fiction that is more Pulp Noir than hard science. Hard nosed Captain Kyle is driven on many levels one of which is his huge ego and his ever present “hunches” that seem to save the day for everyone. Except the guards that are killed like the red shirts on Star Trek. The aliens were not very well thought out, especially this invisible hovering presence that is menacing and intelligent. There is a hottie professor that should have been thrown in the brig for her constant inability to follow orders plus the other Space Family Robinson retinue that we have come to expect.

Still it held my attention as the world building is good enough to transport to another place and time. The worst part about this novel is that everyone speaks in exclamation points!!

Publishers Description: Hal Adhil and Miri Rodgers are best friends. They spend their days working at a small observatory in the Starfall Mountains beyond the metropolis of Anduruna. Miri is the only person Hal trusts to understand a dangerous secret: Hal can see all wavelengths of light. Hal uses his superpower only when they are free from prying eyes that could report them to the authorities. The lives of Hal and Miri quickly change one night, however, when a meteor crashes into the nearby mountains.

Review: Oh my fuk, this was stupid. Each chapter has some fairly good illustrations that lend form to bare visualizations.

So, Hal is a velociraptor and Miri is a hot fox girl with a long swishy tail. Other beings are cats and raccoons or big birds, although I think that has been done. Somehow they are able to procreate across specie lines in fantasmo world. Hal has a boner (cloaca?) for Miri and both are just too good to be true while his twin brother and his consort are evil to the core as evidenced by the constant adjectives. “Smirks, sinister eyes and self-satisfied smiles”, riddle every paragraph to drive home the fact that, yes!, he or she is patently evil.

This universe makes no sense and being a “Dreamwalker” means absolutely nothing as it is never adequately explained. The ending hints at a sequel with Troopers this-ing and that-ing but leaves you wondering if it is just a bad ending to an interminable read. Another novel that is better suited to the YA genre of fiction.

Publishers Description: It’s not every day that your roommate accidentally teleports you across time and space, but Jennifer MacDonald is not having an ordinary day.  A chance encounter with a custom built computer and an ancient pyramid sends Jennifer to a faraway land with six warring civilizations and an ancient prophecy that has a visitor from the stars at its heart.  All she has to do is unseal one, measly, missing god.

Review: I just could not get into the story line of this novel. Additionally the characters fell flat as they were relegated to this Larping style of discourse. I said that if I ever read about another character named “Kai” I was going to do something quite manic and drastic. So here we have a camouflaged “Kai” spelled Kei. Only now he is Lord fuking Kei.  This may be a better fit for the YA crowd and should be categorized as such. 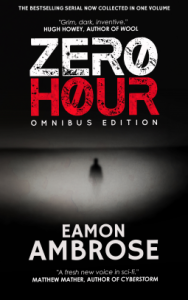 Publishers Description: A sole survivor. A quest for answers. A deadly race against time. Nothing is as it seems, in this daring robo-apocalyptic sci-fi adventure from Irish debut author Eamon Ambrose. Already a bestselling serial, Zero Hour is now collected in a single volume at a reduced price.

Review: A futuristic look down the post-apocalyptic road. Androids and robots with transferred humans residing within and killer robots on the verge of sentience.

This was a pretty fun read. Compelling characters and a quickly paced story line made for a late night.  Get this, you won’t be disappointed.

Publishers Description: As people fight to survive the aftereffects of more than a dozen meteor strikes, a group of wealthy individuals conspires to rebuild the United States as a corporate entity called the New Confederacy, where the bottom line is law. As a second civil war rages, with families fighting against families on opposite sides, Union president Samuel T. Sloan battles to keep the country whole.

Review: I really liked this novel even though it is fairly steeped in military procedure. The characters carry the story line, or rather are the story line as they develop through one crisis or another. The novel follows two sisters that are ideologically opposed and have not only different world views but go about implementing those views in very different modalities.

The slight fall down with the plot is that although the conflict between the North and South have been revived under the shadow of a natural disaster, there is a definite good vs. evil rhetoric that is revealed through thought processes and overt actions. Take for example the Confederate Army. They are willing to indiscriminately bomb civilian populations to realize their goals and resort to torture as an expedient means of gaining information. The Union Army always seems to take the high road and are morally outraged at their oppositions abhorrent actions. Not to mention that the mere idea that a civil war would re-enact itself during disastrous times is almost too far a stretch that a leap is required.

While the sisters are diametrically opposed, it is the thought processes that really bring the Us vs. Them shtick to the fore. Robin gets the shakes and feels deeply about the people under her command while calmly and effectively doing her job without complaint. Sadie barely knows her squad mates as that would compromise their overall effectiveness and petty emotions drive her reasoning. Hate, jealousy and pride predicate most of her actions.

President Sloan is interesting as a by-line but Robin Macintyre really steals the show with her presence and confident ability. Although it is fairly long, I had a good time reading this. 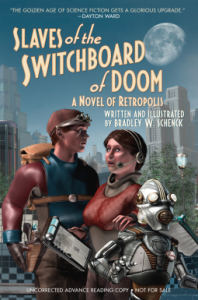 Publishers Description: If Fritz Lang’s Metropolis somehow mated with Futurama, their mutant offspring might well be Slaves of the Switchboard of Doom. Inspired by the future imagined in the 1939 World Fair, this hilarious, beautifully illustrated adventure by writer and artist Bradley W. Schenck is utterly unlike anything else in science fiction: a gonzo, totally bonkers, gut-busting look at the World of Tomorrow, populated with dashing, bubble-helmeted heroes, faithful robot sidekicks, mad scientists, plucky rocket engineers, sassy switchboard operators, space pirates, and much, much more—enhanced throughout by two dozen astonishing illustrations.

Review: The writing is pretty good in what I assume may be a series if the ending is any indication. Where the novel falls down is in it’s length. It is overly long and drawn out to the point that you are soon page flipping over the irrelevant parts and focusing on the chapters that have the best characterization.  Aunt Lillian should of had a larger role in the storyline as she was at once interesting and eclectic. The Douglas Adams approach at world building is  quaint and mildly humorous but has been overly done.

Edit out the numerous and unnecessary characters and place the focus on Dash Kent’s escapades and you have a winner. 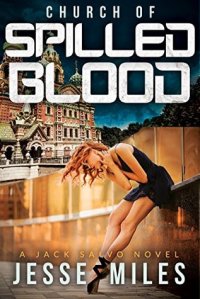 Publishers Description: Drawn into a web of deceit and maniacal revenge, Salvo finds himself in Saint Petersburg, Russia. Now he’s a fish-out-of-water–an L.A. private eye in a strange land.

Review: Jack’s back and this time he’s banging ballerinas and facing down the Russian mob.

The scant reviews that currently exist are mixed but mostly favorable. This is noir at it’s finest where the narrative is detailed and the detecting, procedurally obdurate. I liked Jack although the supporting cast was rather one- dimensional. There is good movement throughout the novel and the storyline is interesting, especially the Russian segment. I had a good time reading this, and in the end, that’s what matters.

Publishers Description: After Detan retrieves the renowned engineer Nouli from the clutches of the empire, he returns his aunt’s city to find it under siege by Thratia’s army. With Nouli’s help, they turn back the tide – ­until imperial forces show up, prepared to hammer Thratia’s army against the anvil of the city’s walls. Worse yet, the imperial advance is aided by an elite force of deviant magic users.

Review: Detan is back, more confused than ever along with Ripka, Tibs and Honey. Once again their existence is threatened by Thratia and her weird torturous minions.

I am not really going to expound on the various nuances of reviewing, such as; story line, character development etc. It’s got all that. We know the players and the general rundown of the plot. Brevity is what is needed in this third installment of the Scorched Earth Series.

I really think this author is trying to find her voice as evidenced in each novel. In Steal The Sky, there were moments of pure writing brilliance that I was left awed by the talent. In part two, Break The Chains, I sensed a gradual declination of not talent but of creative direction in developing a continuing story line. In Inherit The Flame, there was a panicked fall from elegant writing into verbosity and stilted dialogue combined with a dismal story line. There is much too-ing and fro-ing within the confines of this world without the benefit of real tangible movement. This lack of movement trended in parallel with the planning of a ho-hum coup d’etat.

Overall, the writing was not simple and elegant (like the first novel) but rather trended towards the patterned and mundane. “shivers running down spines” and other clichéd phrases littered the pages. Towards the end you begin to see the brilliance re-emerge, but sadly it is too late. A real disappointment for such an aspiring talent.